We’ve decided to allow our years in Thailand to be one experiment after the next. It’s kind of like a gap year for high school graduates or a sabbatical – a block of time where we’re renters again, we have affordable childcare and intriguing work, big adventures, and some time left over for some slowness and simple living practice if we schedule it all right. Maybe someday (that’s a big but hopeful maybe!) we’ll be able to grow or trade for grain but for now, we are adjusting to country life (and life in a developing country) and trying to source and experiment with good wholesome food. 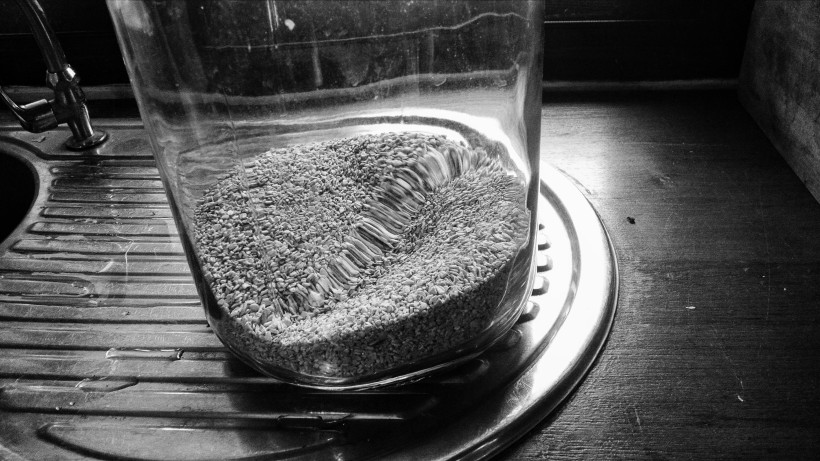 We have a giant glass jar that I used to make kombucha in until I left it so long that the SCOBY got a few inches thick and stopped packing any punch at all to the brew. In the meantime, we had family visit from Canada and haul two costco-sized bags of organic steel cut oats in their suitcases. Thanks mom! (I saw organic oats here once and it was $10 for 250grams). The jar was quickly converted to grain storage since our old place had crafty mice, cockroaches, and more ants stowing away than my entire body weight. The jar was perfect. Strangely enough, our new place in the country has significantly less pests. There’s plenty of insect and wildlife right outside our door but the house itself is a little more secure.

Cut to one lazy Sunday morning in the country where we had our book club group over for brunch and dialogue and left the lid of the jar ajar late into the afternoon. I noticed a trail of ants on the counter and to my dismay, tracked them up the side of the jar and in. I looked closer and the top layer of our precious oats was crawling with ants and some other tiny bug. Camille chose that moment to start actively protesting her nap and I wanted to scream too!

Maybe they all just arrived, I thought… maybe they are just exploring the surface of the grain and I can salvage it. I tried to think of ways that I could skim the bugs off the top and was stuck until I thought of the vacuum cleaner. Perfect! I pulled out the extension and let Camille sing her cries along with the rush of the vacuum. You know that satisfying sound that happens when you roll over actual dirt in the carpet with a vacuum cleaner? It was just like that, x100 as I suctioned up the top layer of steel cut oats. It was oddly enjoyable. That high ended pretty quickly though as I realized that after a few more rounds of suctioning, that of course, the bugs are tunneled throughout the entire jar of oats. To hope otherwise was entirely optimistic. I stared through the glass at the bottom and realized that it wasn’t just an odd ant that had made it to the bottom, but that they were crawling in and out among all of the grain, way down to the very bottom.

Hot, frustrated and resigned to eat buggy oats for the next six months, I left the vacuum full of oats and sat down to the computer.

So, yes it’s safe to eat grain weevils. And ants. I can’t imagine how frustrating this whole thing would be if we had grown it all ourselves and I respect our forefathers for figuring out good systems for food preservation (especially in a pre-plastic world). I transferred the oats that escaped my vacuuming frenzy into a bag and placed it in the freezer to kill the critters. “More protein.” Yum.